So, what is, formally, a coupling ? Of course, one will go to Wikipedia's page «Coupling (Computer programming)» to have a first answer. But maybe we can try to search on our own.

For the moment, we will try to modularize on a screen basis, i.e. to move each screen into its own pod. Thus what we want to know is how much "link" there is between a screen and the others modules of the application.

Fortunately, we already have a division of our modules by screen: 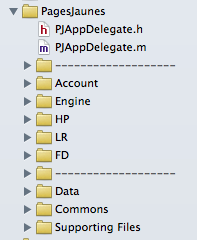 From the outside, this seems nice and clean but maybe not. So how to measure how entagled our code is. A possible start would be to list all the #import of headers which are not in the same module as the importing file.

Let's try with the HP module. First, we want to find all the #import.:

Maybe we would like to know which header is the most imported: Next, we want only the name of the header (forgive my shell scripting capabilities please), that we will keep in the /tmp/imported.txt file Then, we want all the headers in the module, and we will put them in the /tmp/samemodules.txt: At last, we want all the headers in the /tmp/imported.txt but not in the /tmp/samemodules.txt, which we can write as module.txt > /tmp/extern.txt So now, a bit of stats: So in the HP module, we import 120 headers. 106 of those aren't in the module.